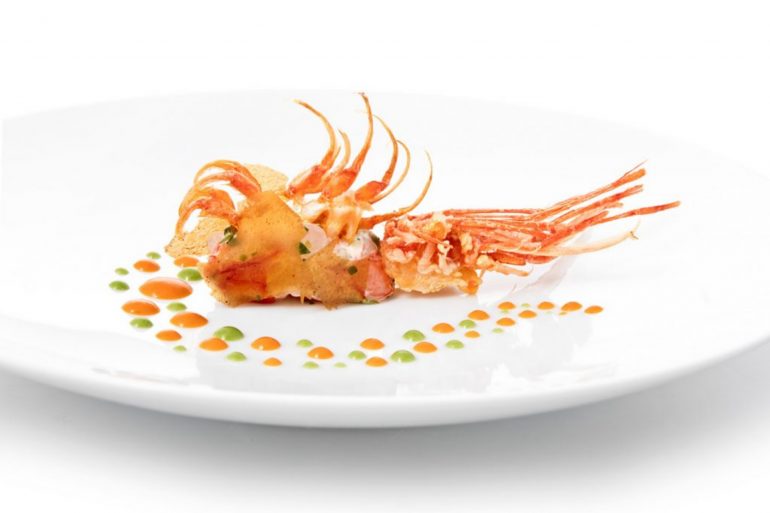 Riccardo Bassetti: haute cuisine by the chef from Piemonte at Forte Village

Holidays are often remembered by the experiences of trying new flavors and fragrances, gourmet recipes made by Michelin starred chefs of international and national cuisine like Riccardo Bassetti who created a special dinner at Forte Village on the 5th July 2019.

Chef Riccardo Bassetti is head at La Tavola, a gastronomical restaurant located within the 4 star Hotel Il Porticciolo in Laveno Mombello, province of Varese, on the shore of a lake which marks the encounter between nature and cooking.

A gourmet cuisine that includes three different tasting itineraries able to make even the most demanding palates happy and which is capable of conquering the diners with high quality menus that respect the seasonality of raw materials coming almost exclusively from local farms and livestock and the best fish from the lake. If the art of baking is entrusted to the expert hands of Giovanni, father of Riccardo Bassetti, chef and patron of Porticciolo, the search for the perfect match that combines the ideal wine with the dish is thanks to the sommelier and maitre Elisabetta Ballerini, mother of the chef and soul of the room.

Therefore you can see that the Porticciolo and La Tavola is a family business run with love. In 1981 Elisabetta and Gianni decided to open the restaurant after running a bar in the center of Laveno Mondello, and afterwards opened the hotel now rated with four stars and the restaurant prized in 2017 with a Michelin star.

Riccardo Bassetti: who is the chef at La Tavola restaurant

Riccardo Bassetti was born in 1982 and has been head chef at La Tavola restaurant since 2012. He is a young talent of Italian cuisine who has collaborated with some of the most important national and international chefs of our time.

During his studies at the hotel management school in Stresa, he did an internship at the Sorriso with madam Valazza and then went to the Excelsior Palace in Rapallo. After school he continued his education under the attentive eye of his father Giovanni while following a university course at IULM in Milan, where he graduated in tourism sciences, he also had the occasion of working with Davide Oldani at D’O.

Once he concluded his university course, Bassetti worked beside Sergio Mei in the Four Season in Milan for two years, he then collaborated with Mei at the opening of the famous Atelier de Joel Robuchon on the Champs-Elysées which was given two Michelin stars just six month after the opening. The chef also had the experience of working with Yannick Allenò at Maurice and in the kitchen of Sur Mesure in the Mandarin Oriental Palace of Paris where he came to know monsieur Thierry Marx who created a team of young talents including Bassetti. After just six months they received two Michelin stars.

In 2012 Bassetti decides to return to Italy to test himself in the kitchen of the La Tavola Restaurant. His cuisine, synonymous with the balance within flavors, aromas and textures and an expression of Italy based on the places dear to the chef, is soon appreciated by Enzo Vizzari of the Espresso who indicates Bassetti is one of the twelve young talents of Italian cuisine. A talent celebrated not only with the 2017 Michelin Star, but also with the national finals of the Bocuse d’Or in 2016 and with the victory of the star chef contest organized by the Sina group Hotel in 2018.

Chef Riccardo Bassetti brings his cuisine to Forte Village, a balanced mixture uniting the gastronomical traditions of Made in Italy with innovation and experiences matured during his years beside some of the most important chefs in the world.

Among the recipes dedicated to Italian territory but married with a hint of far away lands, there is the Sicilian raw red shrimps and crustacean paper with Romesco sauce, a dish made in occasion of his participation at the Sina Chefs Cup which he won.

The theme of the 2018 edition was fashion, interpreted by the chef with a sea-food dish in which the iconic shrimp is “undressed” and re-dressed. Bassetti uses the body to make a tartare, he fries the legs and antennas and uses the other parts to make a shrimp broth which he transforms into crustacean paper, a base for enhancing the flavor of the shrimp. Small touches of romesco sauce and basil oil complete the dish.

It is not the first time that Forte Village has hosted starred chefs like Fabio Pisani, Davide Comaschi ed Enrico Cerea.

Would you like to immerse yourself in the beauty of the Sardinian sea and have an unforgettable vacation in a true paradise full of wellbeing, relaxation and local flavour? Discover Forte Village Resort in the south of Sardinia.