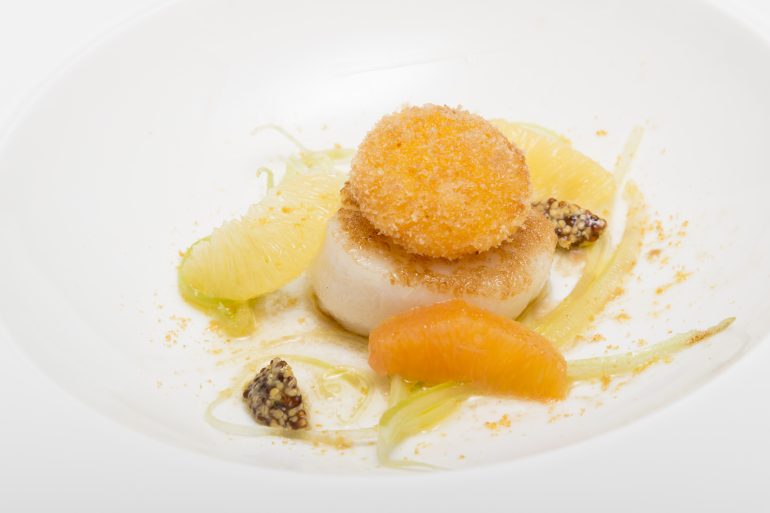 Whether it’s just a weekend or a long stay, holidays are the best time to discover new world-food trends at Forte Village, the resort surrounded by the beautiful Sardinian sea turns into a sensory experience thanks to the dishes of the most beloved starred chefs of Masterchef.

Masterchef, the most successful culinary talent show in Italy that brought haute cuisine to the screen, was an idea of the British director Franc Roddam and was broadcast for the first time on the BBC in 1990.

The first season of the program’s Italian version, in which aspiring cooks compete for the victory, aired from September 21st to December 7th, 2011, on the “Cielo” channel, while from the second edition, the talent show was broadcast on the channel “Sky Uno”.

The transmission is a succession of tests ranging from knowledge of raw materials to creativity in the kitchen through the mastery of different cooking methods and recipes. The evidence is divided into:

The winner of the Sky cooking show won €100,000 in gold coins and the opportunity to publish a book, published by Baldini+Castoldi, with their original recipes.

Besides the classic broadcast in Italy, there were three spin-offs: Junior Masterchef, featuring children between 8 and 13 years old, Celebrity Masterchef, starring 12 competitors from the sport, entertainment and journalism world, and Masterchef All Stars, which saw the participation of 16 of the most talented former competitors from previous editions.

Besides having participated in Masterchef Italia as judges of the cooking show or as exceptional guests, Bruno Barbieri, Carlo Cracco, Terry Giacomello, Andrea Berton and Heinz Beck, are among the Michelin starred chefs who at Forte Village Resort transform the knowledge and flavours of national and international cuisine into balanced culinary works of art

matured with experimentation, innovation and tradition.

Let’s discover together the recipes that the five chefs have put forward for the guests at the resort:

Cut the tip of the egg with a small knife, separate the red from the egg white, then beat the egg white with a whisk and cook in a small pan with a small amount of butter. As soon as the egg white begins to coagulate, add the cream, salt and pepper, then add the egg yolks and let them go for a minute. They must be scrambled but very soft.

To one side, make a small Taleggio fondue by combining the cream with the Taleggio and the paprika. Cook it in a bain-marie. It should reduce slightly. Fill small bowls with coarse salt and lay the eggs and serve them hot. After sterilizing the shells, fill them in layers with the scrambled, then with the fondue, and with the dried fruit. Add a knob of butter. Finally, put the egg in the oven for a few minutes.

Sauté the chopped shallot in a pan with butter, add the rice and toast it on the heat. Pour in the white wine and continue cooking for about 15 minutes, gradually add the slightly salted boiling water. At the end salt to taste. Remove the rice from the heat and stir with mascarpone and a little fresh horseradish juice.

Spread the anchovy paste on the bottom of the plate, grate the lemon peel on top with a microplane and lay the risotto on top. Complete the dish by placing the chocolate disc in the centre.

For the red radicchio sauce: peel and cut the potatoes into strips, brown in QB seed oil and sprinkle with water until the potatoes are overcooked. Meanwhile, peel the red radicchio and keep only the red part of the leaf. Whiten it by immersing it in water and boiling vinegar. Cool in water and ice. Squeeze the radicchio and blend it with the previously cooked potatoes. Pass through a strainer to obtain a homogeneous and smooth sauce. Salt to taste.

Pine honey air: reduce the pine honey to half by cooking. Add 80 grams of water and stir until the honey has dissolved completely. Add soy lecithin and blend to obtain an air.

Chinotto juice: reduce the quinotto juice to half on the heat. You will get a thick syrup similar to molasses.

Vacuum the sliced codfish with 20 grams of seed oil. Cook it in a bain-marie at 68# for 8 minutes

Wash the pine sprouts with purell, put them in a glass container with the solution of 100 grams of water and 40 grams of salt. Let them ferment for 5 days.

Application: remove the cod skin and season the fish with the Triphala powder only on the surface adhering to the skin. At the bottom of the dish, put a spoonful of red radicchio sauce

Add the quinotto reduction, on the sides, put the air of pine honey lay the fish slice and garnish with pine buds.

For the parsley cream

Blend the ingredients in the hot mix, season with salt, switch to the Chinese steamer and place in a bain-marie.

For the leek powder

Clean the leeks and cut them into diamond shapes. Cook in boiling water for 5 minutes, and cool immediately in water and ice. Drain the water and dry it on absorbent paper. Heat two non-stick frying pans well and burn the leeks. Place them on two gastronorms and dehydrate them 10 hours to 70 years. Then blend them in the hot mix and store the powder in a container.

Place the previously washed seafood in a gastronom and bake at 100 º C. for 2 minutes. Cool the gastronom on a tray with ice. Take the seafood and lay it on a tray in contact with absorbent paper, re-heating it only at the time of service.

Cook the pasta in salted water for 9 minutes, salt it in a pan with a drizzle of extra virgin olive oil, broth and a garlic clove. Place the parsley cream on the plate, then the rigatoni, the seafood and finally the leek powder.

Tomato water: blend the tomatoes. Pour them into cloth, close the top and hang them over a basin to collect the tomato water.

Open the sea truffles in a pot with wine, herbs and vegetables for about 3 minutes. Take leaves off the bouquet of parsley and basil. Blanch in boiling water for 4 minutes and immediately cool the leaves in ice and water. Blend them with 50 ml of their cooking water, with the sauce obtained from sea truffles, boiled potato and a drizzle of extra virgin olive oil.

Put the oil and garlic cloves in a vacuum bag. Steam cook in the oven at 63 º C for 20 minutes.

Cook the spaghetti in abundant salted water for 5 minutes, drain and immerse in boiling tomato water. Finish cooking by adding, if necessary, cooking water to the pasta. Add 2 tablespoons of extra virgin olive oil flavoured with garlic and the previously shelled sea truffles.

Do you want to experience a holiday of taste and relaxation in a true paradise? Discover the Forte Village Resort in Sardinia.