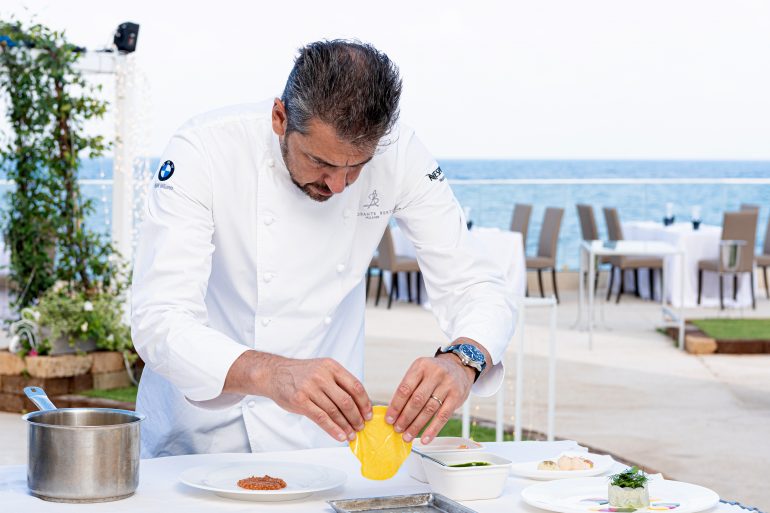 Forte Village is home to many national and international cuisine stars. The multi-prized resort in Santa Margherita di Pula, in province of Cagliari, will be hosting innovative and creative chef Andrea Berton from the 25th to the 21st of August.

Fresh, natural and free. Three words to describe the unmistakable style of chef Andrea Berton, a master of Italian cuisine.

The Michelin starred chef will be the 2020 summers protagonist at Forte Bay, a restaurant at Forte Village which offers its guests a marvelous view of the Sardinian sea from its terrace.

Andrea Berton was born in 1970 at San Vito al Tagliamento in province of Pordenone, and grew up in San Daniele del Friuli, town well know for its treated ham. After getting his degree in the hotel school, he began his cooking adventure in Milan, working for the great exponent of Italian cuisine Gualtiero Marchesi.

He then proceeded in working for some of the best restaurants in the world: Mossiman’s in London, l’Enoteca Pinchiorri in Florence, and Louis XV in Montecarlo guided by the famous French chef Alain Ducasse.

Berton earner his first Michelin star in the Taverna di Colleredo, where he worked from 1997 to 2001, soon after he went back to work with Marchesi as Executive chef of the team.

In 2005 he began his collaboration with Trussardi alla Scala restaurant where he received his first Michelin star in 2008 and the second dine in 2009 to which will be added other important recognitions including the tre Forchette of the Gsmbero Rosso in 2010 and the true Cappelli in the guide of the Espresso in 2011. In September 2012, him and a group of associates opened the Pisacco Restaurant and Bar, in July of the next year he also opened DRY Milano Cocktail&Pizza.

In December of 2013, chef Berton opened the restaurant holding his own name, centered on the creation of dishes valuing common and rare ingredients. His professionalism was prized one more with a Michelin star in November 2014.

In March 2015 the chef was nominated EXPO ambassador and in September 2016 he received 18 points out of 20 from the Espresso guide and Tre Forchette from the Gambero Rosso. That same year in October he received the Tre Cappelli from the Espresso guide of Italian restaurants, also the Risotto Scotti prize “Risotto Dell’anno” and in August he began a new collaboration with Il Sereno, a luxury resort near the lake of Como where he opened Berton Al Lago restaurant. One year later he inaugurated the Nuovo DRY Milano, in Viale Victoria Veneto 28 in Milan.

In 2018 chef Andrea Berton won the Premio Pommery “dish of the year” and was also judge in the Rai cooking show: Is ristorante dello chef.

Andrea Berton will bring the representative dishes of his restaurant Berton in Milan to Forte Village Resort, including his broth, with a revisitation by using typical Sardinian Products. Berton has elevated his broth to be a main dish, it represents the maximum synthesis of the main ingredient in every recipe. The menu will also include a fish dish with local products.

Chef Berton, you will be present at Forte Bay from the 25th to the 21st of August, what should we expect? Will you be presenting any particular menu?

I will offer the guest at Forte Bay my most representative dishes. I will present my cuisine philosophy, a series of revisited dishes from my restaurant Berton, including the broth of which I have made a tasting menu in my restaurant in Milan.

You have managed to give value to many ingredients in a unique manor: there will be a new dish, have you thought of any novelty?

I believe all ingredients should always be valued. There will certainly be a new dish to be presented at Forte Bay, it will be defined by ingredients from the area, mainly fish and Sardinian products, developed with my cooking philosophy.

Your cuisine is very recognizable, but in your opinion what defines the experience offered by a Michelin starred chef?

For me cooking must be direct and immediate, therefore immediately recognizable. A Michelin starred chef must be able to guide its guests and eliminate any sort of prejudice, the experience must be inclusive and speak the philosophy of the chef’s cuisine.

What does cooking mean to you? Creativity, challenge, art?

For me cooking means respecting the prime ingredients, respect of the client, sustainability, respect of all things part of the food world. Alongside being the main source of our work, creativity is fundamental. The challenge is to improve ones self every day. The plating is a form of art, cooking contains all these characteristics which must be combined in a correct way and made unique so the client can have a full experience.

Is there still something that excites you in your every day work?

Everything I do excites me, it’s fundamental. From discovering a new ingredient to creating a new dish. Satisfying the client by searching for new ideas every day is the highest excitement and something needs to be cultivated.

Cooking is also seduction, will you be doing that with the guests at Forte Village?

Of course I will. I hope the flavors and tastes of my dishes will seduce the guests at Forte Village, that the immediacy and clearness will bring pleasure to the table.

Would you like to discover the creative cuisine of Michelin starred chef Andrea Berton? Book your accommodation at Forte Village Resort in Sardinia. 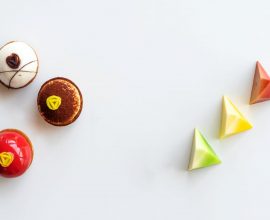