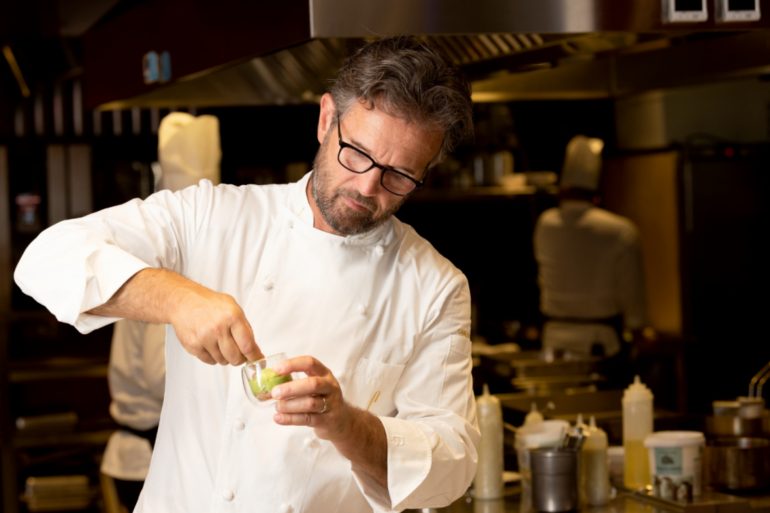 Carlo Cracco: the most adored television chef at Forte Village

After the success at MasterChef Italia and Hell’s Kitchen Italia, the chef considered one of the best in the world has taken a break from his career in television and returned to being an attentive master of the kitchen at Forte Village, where for the month of August he will curate the gourmet cuisine evenings and cooking classes.

The most loved chef on screen will join other celebrities of haute cuisine and will perform at the Terazza Forte Bay and at the Forte Gourmet during the Celebrity Chef Nights. Distinguished among the exponents of national and international cuisine, Carlo Cracco will not limit himself to enchanting the guests with his creations, he will also reveal the secret to his gastronomical philosophy which has made him famous around the world.

Food is synonym of culture and the dishes prepared by Cracco are a show-case of Italian gastronomy made with passion and respect, an attentive and constant research which values the history of each ingredient and exalts the flavor of each with combinations and contrasts. Each recipe is a balance between the historical memory of Italian cuisine and contemporary gastronomy. Prime products are treated with an attention to aesthetics during the preparation and result in a culinary art which seduces the diner with a visually pleasant and delicious experience.

Carlo Cracco was born in Creazzo, a municipality in province of Vicenza on the 8th of October in 1965. Cracco went to the hotel school Pellegrino Artisu in Rocoaro Terme then started working at Da Remo restaurant in Vicenza.

His professional career took a promising turn in 1986 when he started collaborating with Gualtiero Marchesi, the first Italian restaurant to receive three Michelin stars, after that he had experiences in Meridiana’s kitchen in Garlenda, Savona, and then three years in France where he studied French cuisine with Alain Ducasse and at the Lucas Carton with Alain Senderens.

After his experience over the alps, he returned to Italy and went to Florence where he became first chef at the Enoteca Pinchiorri which, because of his leadership, received three Michelin stars. He returned to work with the master Gualtiero Marchesi for the opening of restaurant L’Albereta in Erbusco, where he stayed for three years. He then opened the restaurant Le Clivie in Piobesi d’Alba which received a Michelin star just after one year.

In 2001 he was invited by the Stoppani family, owner of Peck, the famous gastronomy shop, to open the Cracco Peck restaurant in Milan. He took on the role as executive chef until 2007 and then became the only owner of the restaurant, earning one Michelin star. In Milan he also inaugurated the bistro Carlo e Camilla in 2014 in the Navigli area. In 2016 he opened OVO in Hotel Lotte of Moscow, his first restaurant abroad. In 2018 he inaugurated Cracco in Galleria, a restaurant in the heart of Milan located inside Galleria Vittorio Emanuele II.

Cracco’s carrer is marked by many important collaborations including those with Trussardi Alla Scala, Palazzo Parigi, Singapore Airlines and Trenitalia and of course the television show Master Chef Italia, first as a judge then as presenter, and Hell’s Kitchen. Later Cracco had some successful publications of which “Se vuoi fare il figo usa lo scalogno”, written in 2012, and “A qualcuno piace Cracco” published in 2013. The chef is also president of “Maestro Martino”, a non profit association promoting the cuisine and the territory of Lombardia.

Forte Village is home to stars of national and international cuisine and of course among the Celebrity Chefs is also Carlo Cracco, who for the whole of August will not only do his best in the kitchen to satisfy our guests, he will also give cooking classes and will be taking care of the gourmet evenings. Consult our calendar of events so that you do not miss the possibility of learning the culinary secrets of a true master, or to try one of his recipes.

Would you like to discover the sea of Sardinia and it’s beauty to experience an unforgettable vacation in a paradise full of healthcare, relaxation and flavors? Come visit Forte Village Resort In Sardinia.